Incentive Travel goes to the dark side: an insight into Dark Tourism

From a young age we are introduced to characters such as witches, wizards and ghouls. Cast your mind back to fairy tales such as Hansel & Gretel, Beauty & The Beast and Jack & the Beanstalk. As we develop, this ‘dark’ interest grows; think of all of the stories, programmes and films that we have exhibited that have slightly darker connotations (Sabrina the teenage witch, Harry Potter, The Huntsman). It could be our exposure to these macabre themes that drive our morbid fascinations with the darker attractions that are becoming increasingly popular across the globe.

Dark tourism is a subset within the travel and tourism market place, where tourists visit places that are traditionally associated with death, tragedy, the supernatural or taboo topics in society. What is important to note is that, this is not a new trend. Throughout history there are many examples of dark tourism, the Colosseum in Rome was built as a sporting arena to watch men fight to the death; in the UK people came in their droves to town squares to watch public executions, to name but a few examples. It is only in recent years, 1996 in fact, that the term ‘dark tourism’ was coined, when two academics applied it to the assassination site of JFK.

Dark tourism sites have grown in popularity amongst tourists. This trend is creeping into the incentive travel market with no sign of slowing, which is, in part, thanks to a Netflix series centred on dark tourism sites across the planet. But dark tourism isn’t all about fulfilling our morbid tendencies, it is a critical factor in protecting our culture and future. Dark tourism occupies an important part of our understanding of what it is to be human – it is a crucial way of learning lessons about the past and a way of ensuring that history does not repeat itself. With over 10 million people having visited Ground Zero in New York since its opening in 2014, and the Auschwitz memorial and museum welcoming over 2 million visitors per year, it is important that these tragedies aren’t forgotten.

With this in mind, Penguins have created a list of dark tourism spots from across the globe that could be incorporated tastefully into incentive trips. There are so many to choose from, this list is far from exhaustive.

A small island between the canals of Xochimico, known as the Island of Dolls, is dedicated to a young girl who tragically drowned in mysterious circumstances. The caretaker of the island found her body and shortly after, a doll floating near the canals. The caretaker hung the doll to a tree as a sign of respect and support to her spirit. Sadly, the caretaker was said to be haunted by the spirit of the young girl and began to hang more dolls in an attempt to please her and rid himself of her spirit. In 2001 the caretaker died, strangely drowned in the same place as the young girl. After 50 years of collecting and hanging dolls on the island, it has become a huge tourist attraction, with visitors hanging dolls as a sign of respect for both the caretaker and the young girl. Visitors have claimed that the dolls move their heads, whisper and even open their eyes.

One of Italy’s most famous tourist attractions is the ancient Roman town of Pompeii. A city buried under 19 feet of ash after Mount Vesuvius erupted in 79 AD. Throughout the explosion mother nature played a course as the ash from the eruption immaculately preserved the town and the poor souls left behind during the disaster. During the excavations, human 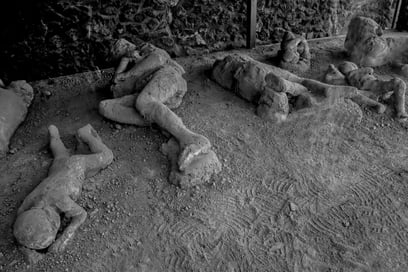 remains were recovered, more specifically hollow spaces left by the bodies. Specialists filled the hollow spaces with plaster to create casts of the victims. The casts are the main appeal of the dark tourism site; some portray facial expressions of those peacefully sleeping, others display horrifying terror – exaggerating the dark connotations. 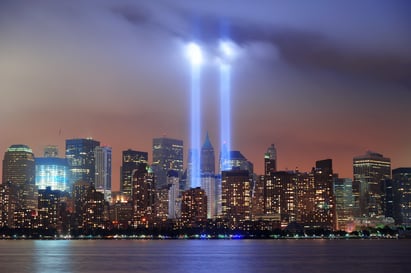 We all remember where we were on 9 September 2011 when two planes flew into the Twin Towers of the World Trade centre, killing 3,000 people. In the place of the towers, a memorial site and a museum were erected, attracting millions of visitors a year, who come to pay their respects to the fallen. Within months of the attacks ‘Ground Zero’ became the latest home of sightseers and tourists; the site’s perimeter filled with all manner of souvenirs, from Ground Zero NYC T-shirts and baseball caps, to ‘Day of Terror’ commemorative books and DVD montages of the disaster. 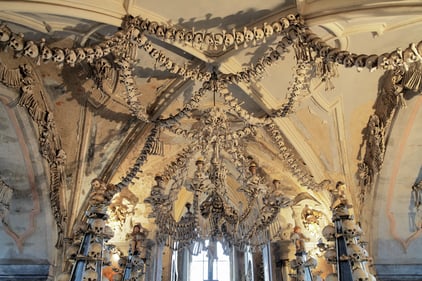 known as ‘the bone church’, is decorated with over 40,000 human bones. The ossuary is famous for its bone chandelier that uses every single bone in the human body; however, there are many more macabre works of art to be explored. There are two bone chalices, four bone candelabras, two bone monstrance’s, six bone pyramids, a bone family crest, skull candle holders and finally, looping chains of bones are hung throughout the ossuary, like decorations at a children’s party. The ossuary was a popular burial ground due to soil from the Holy Land being scattered across the cemetery; it inevitably became overcrowded leading a more creative method of storing the bones…

From 1975-1979, Pol Pot and the Khmer Rouge regime killed 2.5 million Cambodian people. The country lived in fear of being dragged out of their beds in the middle of the night, to be ‘re-educated’ – otherwise known as tortured and executed. By the end of the Khmer Rouge reign, a quarter of the population had been wiped out. Killing fields dot the country, with 20,000 mass grave sites containing more than 1.38 million bodies. However, the largest killing field is Choeung Ek. Choeung Ek is now a memorial for the fallen. In the centre of the area is a 17-story glass stupa which houses 8000 skulls exhumed from mass graves, there are audio tours that provide stories of survivors and ex-executioners, speaking of the methods they used to use. The Killing Fields act as a constant reminder of the genocide that took place across Cambodia.

Alcatraz federal prison was home to some of America’s most difficult and dangerous prisoners from 1934-1963. The prison on the chilly waters of San Francisco Bay was home to legendary gangster, Al “Scarface” Capone, notorious murderer Robert “Birdman” Stroud and George “Machine gun” Kelly, convicted for kidnapping. Many prisoners have attempted to escape ‘The Rock’ however, none have been successful – the most famous escape attempt resulted in multiple inmate and guard deaths, after prisoners gained access to weapons. The prison closed in 1963 due to running costs, but now there are daily tours to the island, where tourists can learn about the history, visit cells and explore the island.

The UK has seen a 307% rise in searches to ‘dark tourism’ destinations since 2016, according to research by Kiwi.com. It is no longer enough for tourists to read and hear about the tragedies that have shaped the world; they want to experience it for themselves. Including dark tourism sites in incentive travel programs will educate your delegates as well as create an emotional affiliation with the trip. If you visit a location that provokes strong emotion in your delegates, there is a greater emotional bond with the location and the people they have encountered this with. Dark tourism may be key to creating the ultimate memorable experience for delegates. Sophie began her career in events back in 2010 after graduating from Bournemouth University with a BA in Events Management. Sophie is passionate about all events but particularly loves working in incentive travel.More articles by Sophie Darbon