Abu Dhabi is a combination of modern cosmopolitan and rich tradition, making it the cultural heart of the UAE. With blue skies year-round, white sand beaches and a sparkling waterfront, Abu Dhabi offers a plethora of opulence. Abu Dhabi is known for being a symbol of luxury, but during this feature, we are hoping to increase awareness of Abu Dhabi as an incentive travel destination.

We began our trip with a visit to Jumeirah at Saadiyat Island Resort. An amazing resort resembling a perennial summerhouse, exuding sophistication and understated affluence. It is no surprise that the décor is ocean themed, with the resort sitting majestically on Saadiyat’s prime beach, privy to breathtaking views of the Persian Gulf. The Saadiyat is dedicated to preservation. Wanting to make as little impact on the island’s habitats as possible; the hotel has designed a nesting area for the endangered Hawksbill Turtle, a wetland area for mangroves to thrive and have eliminated single-use plastic throughout the resort.

On arrival, we were handed yoga mats and lead to the luxurious spa in the heart of the hotel. We were treated to a 45-minute relaxing yoga session, a welcomed stretch after a 7-hour flight. Once the group had checked in, we were taken to the Sheikh Zayed Grand Mosque. We were given abayas (robes), removed our shoes and donned headscarves, demonstrating respect for the culture and Islamic tradition. Then began our exclusive guided tour around the Mosque. Whilst exploring the Mosque it was difficult to ignore the grandeur, tiny details such as precious Amethyst and Jasper were embedded into the columns and intricate floral patterns, using mother-of-pearl, radiated across the walls. The Sheikh Zayed Grand Mosque was the epitome of luxury, depicting the affluence of Abu Dhabi.

Once we had taken in all the marvels of the Sheikh Zayed Grand Mosque it was time to indulge in some of Abu Dhabi’s finest cuisine. We arrived at Hakkasan, hidden away in a forgotten corner of the Emirates Palace with carved wooden screens and latticing; Hakkasan screams A-List but provides intimacy. We were served a myriad of delicacies from peking duck to Sanpei chicken claypot. The food was truly exquisite and gave an insight into the extravagance that can be incorporated into every aspect of a trip to Abu Dhabi.

Day 2 began with drag racing. Yes, I know what you are thinking. Drag racing, in the desert? Abu Dhabi is home to the Yas Marina Circuit, where Formula 1 and World Rallycross take place. Instructed by some of the best driving professionals in the industry we were given the chance to race supercars. It was incredible; who knew driving in a straight-line could be so much fun! The activity came with the added bonus of healthy competition; we had the opportunity to race against each other. This is a great activity for an incentive trip, the conversations it created and the causes for laughter are still continuing now. 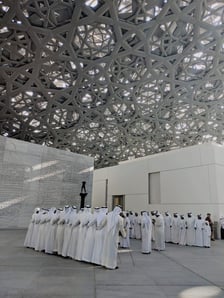 Once we had gotten the adrenaline out of our systems, it was time to venture over to The Louvre Abu Dhabi. Opened in 2017, the museum includes excellent art from the Neolithic up to the present day. However before you even make it to the galleries you need to marvel at the architecture of the building. It includes a water channel that runs through the museum, creating a fresh oasis – inspired by Saadiyat island. A dome covers two thirds of the museum, providing shade for visitors and reducing energy consumption. The dome is a geometric template of stars repeated in different sizes and at different angles in a complex arrangement. Sun filters in through the dome casting interesting shadows, fascinating all that visit the museum. The group were given a recommended 90-minute tour of the museum; however, we could have spent the entire day there, as there was so much to see.

Our final day began at the Saadiyat Beach club. The group lounged around the pool, on crisp white sunbeds, whilst being served breakfast as the sun rose. It was the perfect start to the day, which picked up pace in the  afternoon, as we were whisked away to the desert for dune bashing. Dune bashing consists of speeding 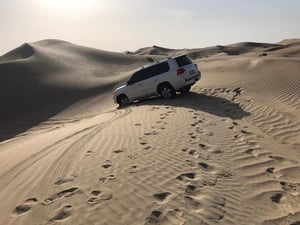 through the desert and bounding over sand dunes. This was a brilliant activity for adrenaline junkies. The drivers stopped at different points for the group to take photos, finally ending up at a camel farm. This was a brilliant surprise for the group, as we were able to see the camels in their natural habitat, up close and personal. Luckily, as we finished our turbulent journey across the dunes we were able to watch the golden sun set behind the stunning landscape,  which was brought to life with hues of yellow, magenta and orange. 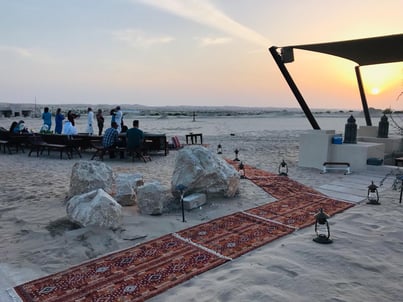 Our final treat of the trip was a falconry display. Falconry is an ancient Arabic tradition still practiced today across the Emirates. While we were fixated by the marvellous skill and control of the falconers, we were also served traditional Arabic meat, cooked in an earth oven. Earth ovens are an ancient method of cooking food in the desert; the local people value tradition and wanted to demonstrate desert culture.

Reflecting on our trip to Abu Dhabi, it is a surprising city with a rich and fascinating culture. Our previous perceptions of Abu Dhabi were mainly based around wealth and extravagance. However, after indulging in traditional food and ancient practices, we realised that underneath all the development and high-rise buildings there is still a vast appreciation for culture. This is evident in the architecture and activities available to visitors. It would be a truly amazing incentive destination that would highly motivate and engage employees.

Don't leave anything to chance when planning your next incentive travel trip, download our checklist to avoid any last minute panic! 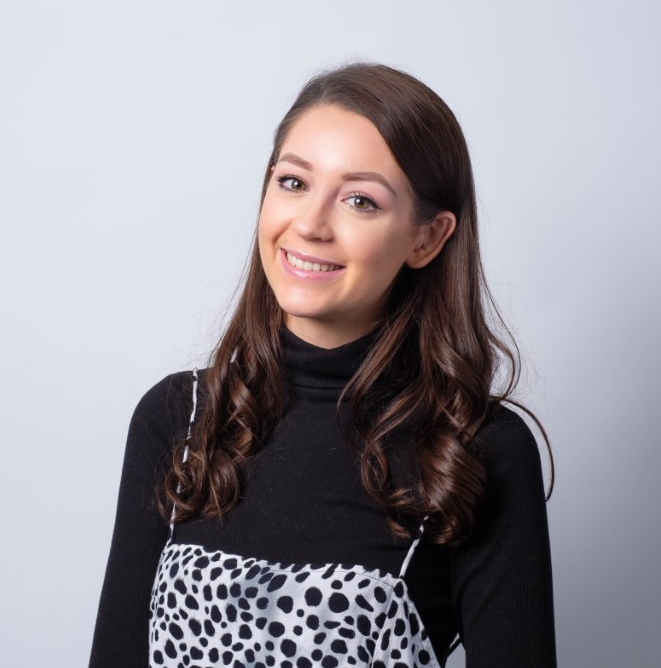 Chloe is currently on her placement year from Bournemouth University, studying event management. She is working within the incentives team as a coordinator. More articles by Chloe Sweeting